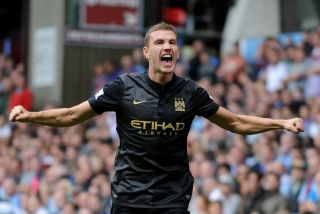 City face the Bundesliga side for the second time in the Champions League after previously meeting them in the 2011-12 season.

They were beaten in the Allianz Arena during that campaign but secured a victory at the return match in Manchester, and Dzeko believes his side are well equipped to repeat that performance on Wednesday.

"We've played a few years together and we also have four new players and they've improved the squad," he said. "We're definitely better this year than last.

"I don't know if they are stronger this year but they were strong last year. We know that and they're defending the Champions League.

"Every player wants to play in the big games against the big teams and the 11 have to give more than 100 per cent to try to win the game. Our fans will be there and we'll give everything, that's for sure."

In their previous two European campaigns, City have failed to qualify from their Champions League group, but Dzeko believes this year they will finally make that step into the knockout stages.

"We don't have to think about the last two years because it's done," he added. "We didn't get out of the group but we have started this season in the Champions League very well and that's important for the team and the confidence.

"Now (we are) at home against the big rival in the group and we want to beat them and stay in the first position."

City recorded a 3-0 win in their opening match of Group D against Viktoria Plzen thanks to goals from Yaya Toure, Sergio Aguero and Dzeko.