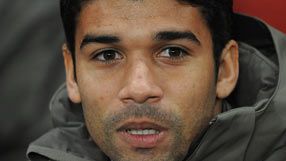 The 27-year-old hopes to capitalise on the North London team's poor record in Eastern Europe on Wednesday night, as the Ukrainian side look for a win to send them level on points with Arsenal at the top of Champions League Group H.

Arsene Wenger's men have only won one of 19 matches beyond the Iron Curtain, before triumphing 3-1 at Serbian side Partizan Belgrade in September.

And the Brazilian-born Croatian is well aware of the psychological pressures that are facing his former team-mates, especially as Shakhtar have yet to taste defeat at their new Donbass Arena.

"Arsenal have always had difficulties against Eastern European teams and I’m hoping they’ll find it the same this time," Eduardo said in The Mirror.

"I know we’re a good team and we’re always strong at home. The team have not lost a single match since moving to the new stadium.

"We are still in a good position. Arsenal remain top with us right behind. We’ve six points, and if we beat Arsenal we’d practically be in the second stage.

"We are aiming to get at least to the quarter-finals of the Champions League. We can certainly do that, we’ve got a great team and all we need is a bit of luck.

"When we watched their previous matches, they always had six, seven chances but scored once or twice. We were expecting that. We weren’t too far behind in terms of chances and didn’t play as poorly as the final score suggests.

"They had their usual five, six attempts on goal, but this time they got five in. I was delighted to score, but the defeat hit the whole team hard."