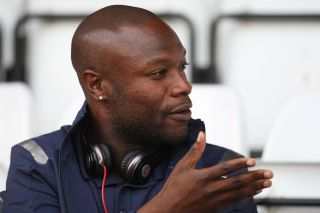 The former Arsenal and Chelsea defender was released from Tottenham at the end of last season after struggling for opportunity at the English Premier League club.

With defender Ljubo Milicevic mutually agreeing a termination of his contract with the Glory at the start of October, the path was paved for the former French international to join the A-League.

"(Edwards and I) spoke for maybe 30 minutes and after what he said to me, I decided with my agent to go to Australia," Gallas told Fox Sports News.

"For me, it was very important to have a new challenge.

"I feel good, I feel very excited to be in Australia.

"I don't know that country, but I spoke with some people who are from Australia and from Perth and they said I will love it."

The 36-year-old promised to bring his leadership qualities to Glory and a mentality that he believes will help improve the club.

"(Leadership) is my personality, but I will go to my new club and I will see how the people are," he said.

"I won't go there and straight away and say: 'oh that was wrong'.

"(It's) very important to bring that mentality, the warrior, the guys who like to win every game, so if the players can respond to that, it will be good for the team and the club."

Buddy Farah, the agent who helped secure the move, praised Gallas' character and lauded football officials and clubs for making the A-League an attractive proposition to star players.

"(Gallas is a) great guy, great player and great signing - it was a pleasure dealing with William and his team," Farah said.

"The league has grown in leaps and bounds and it's testament to the officials and clubs for its growth. This signing was not achievable had the A-league not been as attractive as it is today.

"William acknowledged this and wanted to play a part in its future growth and also the growth of Perth Glory FC."