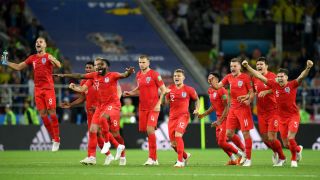 England's team in Russia are similar to Spain's World Cup winners of 2010, according to Luis Garcia.

Gareth Southgate's men overcame Colombia in the last 16 to move into a quarter-final clash against Sweden Saturday.

Garcia, who played 20 games for Spain, feels there are similarities between England and his nation's successful 2010 outfit.

"At least they are here. They are continuing in this World Cup which is something many people probably wouldn't say at the beginning of this competition," he said Wednesday.

"What I see different, and I can compare them to the Spanish team of 2010, they are young, they are young players in that team, they want to do something big for their country.

"They showed [against Colombia] that in the end, even though they couldn't get the result in 90 minutes, they went through and that is what matters in these kinds of moments."

England – aiming to add to their only World Cup crown won in 1966 – meet Sweden in Samara Saturday, with the winner to face either Russia or Croatia.