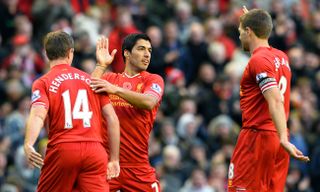 Gerrard has been an ever-present in the Premier League this season, forging a central midfield partnership with Lucas and helping Liverpool to second in the table.

The 33-year-old provided assists for Martin Skrtel and Luis Suarez to score in the 4-0 win over Fulham on Saturday as part of a fine individual display.

Enrique believes Gerrard remains crucial to the team's success, despite playing in a slightly deeper position than earlier in his Anfield career.

"He has been playing fantastic like always. He's our captain and he's been really, really important for us," Enrique said.

"When you get older, you lose something physically and when he was playing with (former Liverpool striker Fernando) Torres, he was more behind the striker, making runs.

"Now he plays deeper, keeps more of the ball and works differently. He is playing with Lucas now in that sitting role, which he didn't play when he was younger.

"But the quality of the passes and the crosses he produces, and the free-kicks, at 50 years of age, he will still be doing the same thing! He will always have that and his quality is amazing."

Enrique came off the bench in the win over Fulham to make his first appearance for the club since October 5, having suffered with a knee injury.