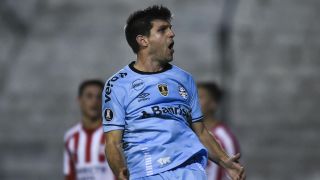 Arthur helped Gremio to achieve the third Copa Libertadores success in their history last season, but the Brazilian club must try to defend their crown without the influential midfielder following his transfer to Barcelona.

And in the 21-year-old's absence, Renato Portaluppi's side fell to a narrow defeat against the four-time champions in Quilmes.

The hosts opened the scoring in the ninth minute at Estadio Centenario through Juan Apaolaza, who received possession outside the Gremio area and fired a stunning, looping strike over the head of goalkeeper Marcelo Grohe and into the top corner of the net.

Estudiantes doubled their lead in the 37th minute, Gaston Campi meeting Fernando Zuqui's corner at the near post to flick a header past Grohe and into the far side-netting.

Gremio responded with a minute remaining in the first half. Mariano Andujar did well to save Andre's initial downward header, but he could only parry the ball clear, leaving Kannemann free to nod it back over the prone shot-stopper and into the back of the net.

Estudiantes survived the final 13 minutes with just 10 men after Zuqui picked up a second yellow card.

And while Gremio could not capitalise on their man advantage to snatch the equaliser, Kannemann's goal could yet prove vital when the sides meet again in Brazil on August 28, with Atletico Nacional of Colombia or Argentina's Atletico Tucuman awaiting the winner of the tie in the last eight.