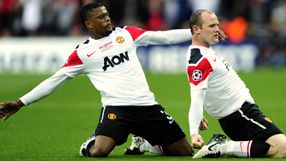 The England international has missed the last month of the season after suffering a gash to his leg during the 3-2 win over Fulham at the end of August, but was instrumental in United’s 2-1 win over FC Cluj on Tuesday, assisting both of Robin van Persie’s goals.

However, Rooney is yet to find the net this season, while Van Persie has scored five goals already.

Now Evra has hit out at those criticising the 26-year-old, saying: "People criticise really easily.

"They were talking about Robin [van Persie] so much I thought we've just got one striker.

"Robin's an amazing player and that's good but people mustn't forget what Wayne Rooney has done for this club.

"When someone new comes, everyone is excited and forgets the old things. But Wazza [Rooney] will show it to everyone."

Summer arrival Van Persie also praised Rooney following his performance in the 2-1 win, pointing to his assists to help seal the win.

"He gave me two excellent assists. It is really good that he is back."