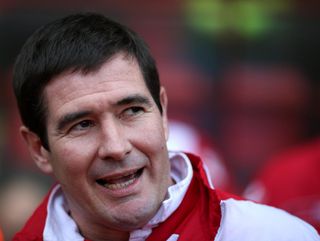 Brian Clough took his Nottingham Forest side - featuring son Nigel in attack - to the final of this competition in 1991, losing 2-1 to Tottenham thanks to a Des Walker own goal in extra-time.

This Sunday's semi-final represents Nigel's chance to claim the national limelight, but the Bramall Lane outfit will need to produce one of the Cup's most famous upsets to book their place in the final.

United are the first third-tier outfit to reach the last four since Lawrie Sanchez led Wycombe Wanderers to this stage in 2001 - the current League Two outfit losing 2-1 to eventual winners Liverpool. No side from so far down the Football League has ever reached the final.

Having already dumped out the likes of Aston Villa and Fulham, United will not fear taking on a team of similar Premier League standing in the shape of Hull.

United have won this trophy on four occasions, their last coming in 1925, while their opponents this weekend are going in search of their first FA Cup final appearance.

Hull's form has been mixed of late - losing four of their last seven in all competitions - but a 1-0 win against Swansea City last Saturday will have given them a timely confidence boost.

The KC Stadium side will be without cup-tied strike duo Nikica Jelavic and Shane Long for their first semi-final since 1930.

Despite their absence, manager Steve Bruce is looking forward to a Wembley reunion with Nigel Clough, whom he met as a player in the 1992 League Cup final, and fondly recalls his first encounter with his opposite number's famous father.

"The first time I met his dad, I was at a PFA 'do' and at the toilet," he is quoted as saying by the Hull Daily Mail. "I was at the urinal when, suddenly, I felt a whack from behind.

"I turned round and it was Nigel's dad. He said: 'You, young man, have been doing that to my son for the last 10 years, how do you like it?' I laughed and Brian laughed.

"Nigel, for who his dad was, it can't have been easy in his career.

"But Nigel has done remarkably well in his own right. Especially at Sheffield United. It is fantastic to get them to a semi-final."

Tom Huddlestone could be in line for a return to Hull team after missing last weekend's clash with Swansea with a back problem, while Bob Harris (thigh), Matt Hill (hamstring), Jose Baxter (hip) and Stefan Scougall (thigh) are all expected to be involved for United.

The winner of this tie will meet the winner of Saturday's semi-final between Arsenal and Wigan Athletic.