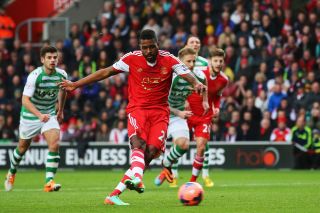 The Brazilian converted a penalty midway through the opening half at St Mary's, after referee Phil Dowd had spotted a handball from Shane Duffy, to score for the first time since January 14 2012.

Jay Rodriguez and Adam Lallana hit the crossbar for the Premier League side either side of Guly's strike.

However, Championship strugglers Yeovil had chances of their own prior to teenage substitute Sam Gallagher wrapping things up for Southampton with his first senior goal 20 minutes from the end.

Having beaten second-tier opposition at home in the third and fourth rounds, Southampton will hope for another favourable draw when the last-16 ties are revealed on Sunday.

Yeovil can take heart from a spirited display, which belied the fact the club have won only five league games this season.

Rickie Lambert (hamstring) and Artur Boruc (back) missed out with minor injuries as Southampton, minus the suspended Pablo Daniel Osvaldo, fielded a starting XI showing six changes from last weekend's draw at Sunderland.

Striker Ishmael Miller was back in Yeovil's team, having returned to the club from Nottingham Forest this week for a second loan spell, while Jamie McAllister replaced the injured Zoumana Bakayogo.

However, Rodriguez soon forced Marek Stech into action at the other end before heading against the crossbar from Nathaniel Clyne's cross in the 18th minute.

And Southampton moved ahead shortly after, Guly sending Stech the wrong way from 12 yards after Duffy had been penalised for handling in the area.

A mis-directed cross from Lallana then clipped the top of the bar prior to Hayter spurning Yeovil's best chance of the half in the 37th minute.

The experienced striker met Ralls' left-wing cross but was denied by Davis from point-blank range.

Southampton forward Rodriguez saw a first-time effort saved three minutes later, while Miller blazed over on the stroke of half-time.

Yeovil threatened again immediately after the interval, with Davis reacting well to tip Luke Ayling's effort past the post.

Davis made a more comfortable stop from John Lundstram before Southampton's James Ward-Prowse cleared the bar with a powerful long-range volley.

With the game becoming increasingly open, Stech kept out shots from Clyne and 18-year-old Gallagher.

The latter then put the match beyond Yeovil with a fine goal, which saw him jink past two players before applying a low finish.

Gallagher had another effort blocked on the goalline and Stech made a superb late save from Steven Davis, but it mattered little as Southampton eased to victory.