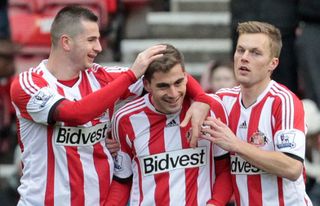 Mavrias' early goal proved to be the winner in a contest that Premier League Sunderland controlled but struggled to put to bed.

For their part, Kidderminster - the lowest-ranked side left in the competition and four divisions below their opponents in the Conference Premier - competed well but ultimately did not have the quality to cause an upset.

Sunderland manager Gus Poyet made 10 changes to his starting line-up following the dramatic League Cup semi-final win over Manchester United in midweek, with only Lee Cattermole retaining his place from the penalty shootout success at Old Trafford.

For Kidderminster, the injured Lee Fowler was replaced by loanee Jack Dyer, with Argentinian signing Santiago Aloi again starting on the bench.

Backed by 4,000 vocal fans and sporting a daring all-purple kit, Kidderminster were under pressure from the start, and they fell behind in the fifth minute when hesitant defending allowed Greece winger Mavrias to curl a neat finish into the bottom corner from 15 yards.

However, Kidderminster were nearly gifted an equaliser after nine minutes when a slack backpass let in top scorer Michael Gash, whose low shot squirmed under goalkeeper Ustari’s body before the debutant gathered at the second attempt.

With Sunderland controlling play, Kidderminster defended deeply and keeper Daniel Lewis' goal was under siege for much of the first half, with Sebastian Larsson, Emanuele Giaccherini, twice, and a long-range Cattermole effort all going close.

Sunderland started the second half again on the front foot, with Frenchman El-Hadji Ba shooting straight at the keeper from the edge of the penalty area.

Ba was then almost immediately booked for a dangerous challenge, when he clashed heads with the Kidderminster’s Amari Morgan-Smith.

The non-league side defended resolutely and they remained a danger on the break, with Sunderland resorting to long-range efforts as they were frustrated.

Vergini stung Lewis' palms from 30 yards on the hour mark, and then Ba lofted a shot over the crossbar from the edge of the box.

With Poyet keen to wrap up the game, he made a double change after 65 minutes, with Fabio Borini and Craig Gardner entering the fray.

Borini immediately gave the visitors more to think about and he swiftly fired over from 20 yards when he could have done better.

Sunderland played out the last 20 minutes in comfortable fashion with a giantkilling not looking likely.

A late shot from substitute Freddie Ladapo flashed just wide of the post as the visitors carved out one last chance late on, but they just fell short.