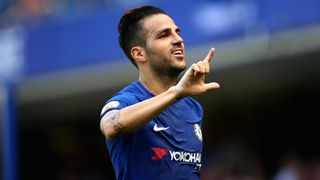 Chelsea midfielder Cesc Fabregas has described Arsene Wenger as a father figure and insists he still has a lot of affection for Arsenal.

The Spain international spent eight years under Wenger in north London before being sold back to Barcelona in 2011.

Fabregas became a leading figure at the Gunners but they declined to take up the option to sign him back in 2014, allowing him to move to rivals Chelsea, where he has since won two Premier League titles in three seasons.

Speaking ahead of Sunday's derby clash between the sides at Stamford Bridge, the 30-year-old says Arsenal still hold a special place in his heart despite his decision to sign for Jose Mourinho three years ago.

Asked if Arsenal were like an "old girlfriend", he told Sky Sports: "I wouldn't call it that. It's much more than that, because sometimes an old girlfriend you lose connection with, you don't feel anything for after years.

"I feel very attached, even now, to Arsenal. My feelings for the club, well I don't have to repeat myself, every single time we play against them, because it's known. Whoever doesn't believe me, or doesn't feel it is this way, is not right. I know how I feel, my family does, and that's all that matters to me.

"Once I made the decision to leave Barcelona, Arsenal had the first option, and Barcelona had the obligation to contact Arsenal first. Then they had a week to basically respond yes or no to the buy-out clause.

"I knew Chelsea were on the side, among other clubs, but after I spoke to Mourinho in the meantime he convinced me that it was a great place to come. The week passed, Arsenal never responded, never contacted me either, so I took it as them having enough players in their squad, so I made my move to Chelsea.

"Because I felt they wanted me the most, Jose spoke to me in a way that not many have spoken to me before, and I knew what he wanted from me. He motivated me so much in that meeting that my choice was very easy.

"I love Arsene, the man. I love him of course as a coach too. This is a decision he made. I always said that he's like a father to me, and he will always be."

Fabregas' future appeared uncertain after a tough 2015-16 campaign but he recaptured some of his best form in Antonio Conte's first year in charge, particularly in the second half of last season.

He admits he is happy to have silenced critics who doubted whether he would be suitable for Conte's tactical system or would survive the shift to a 3-4-3 set-up.

"It was a difficult first half to the season for me last year, something I have never experienced before, but I feel I turned it around by working hard, getting my head down, being humble, training and training, playing well when they called me, and earning the manager's trust," he added.

"I'm the type of guy that when I'm told I can't play under this type of manager, not with his style, if you tell me this some fire comes inside me, and I want to prove everyone wrong. And that's what I did, and hopefully I can keep it up for as long as I can."