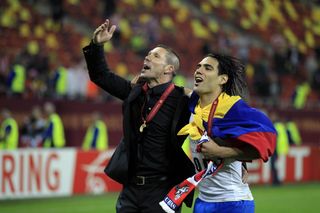 Falcao moved to Atleti in 2011 for a club record €40 million after helping Porto to the treble.

In the Colombian's first season, he helped los Rojiblancos to their second Europa League title. He ended the term as Europe's sixth-top scorer.

But in their second season together, Falcao and Simeone – recently voted FFT's Best Manager in the World – enjoyed record success.

Falcao's 39-minute hat-trick saw off Chelsea in the Super Cup as Simeone oversaw a cup double with victory over arch-rivals Real Madrid in the Copa del Rey later in the season. Atleti also recorded their highest league finish in 17 years.

"He’s a really passionate coach, obsessed with the littlest details," Falcao told FourFourTwo. "He’s a great motivator and above all else he’s constantly motivating and supporting his players.

"It’s difficult to say [whether Atleti would have succeeded without him], but we’re proof of what he’s done. Under him, Atletico have reached an incredible high level in European football and he’s known how to keep that going."