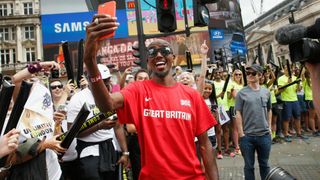 Great Britain's Mo Farah is looking to defend his double Olympic title at next month's Games in Rio de Janeiro.

Farah warmed up for Brazil with an impressive showing at the latest Diamond League meeting in London, winning the 5,000metres and crossing the line in under 13 minutes on Saturday.

He claimed gold in both 5,000 and 10,000m four years ago on home soil in London, and feels he is better placed to make a charge for medals this time around.

"It will mean a lot to me. I'm trying something that's never been done before," Farah said of defending his titles.

"I get nervous talking about it, I get quite emotional, because London was huge for me, London was amazing. This track [the London Olympic track] was incredible. And now, four years later, I'm trying to defend my title.

"It's quite nerve wracking but, at the same time, training's been going pretty well, I'm happy where I am. And the last two-and-a-half weeks, I just have to stay injury-free, stay focused, and just keeping doing what I'm doing."

Farah added: "It does give me an edge over four years ago and I am a better athlete.

"So that is harder than knowing it's the first time that you're going to win. You win it - and that's it. No - I have four years of target on my back."