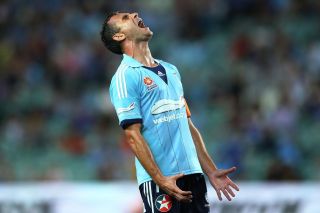 Even though Besart Berisha was sent off in the 40th minute, the Sky Blues failed to capitalise on their numerical advantage.

"I'm disappointed, especially when they go to 10 men but we were our own worst enemies tonight," Farina declared.

"We've seen it in the past even when we've gone down to 10 men it's been very difficult for other teams, we couldn't take advantage of it tonight."

Farina explained that wrong decisions, bad passes and poor touches were the reason his team didn't perform better on the night and take advantage of the extra man.

"If you look at the stats, the possession we turned over in our own half or the middle third was terrible to say the least and we've got to be better than that if we're going to take advantage of those situations."

"I wasn't happy. It was as though we were almost scared, panicking, rushing. I certainly expect better."

"The first goal was a sucker punch," he said.

"We were attacking and in transition as I said previously, 80-90 percent of goals in the A-league this year are scored in transition with one team attacking, losing possession and bang a goal and that's what happened with the first goal."

When pushed to comment about Berisha's sending off, Farina claims it was difficult to see what happened.

"I don't know, you don't see it you just see the clash, especially where we were.

"Seba (Sebastian Ryall) got a yellow card for pushing, as far as I know it was a double-footed tackle."

"There was some fluid on the hamstring, no tear. He had the scan earlier this week on Tuesday, he couldn't train and there was no point risking him, not with what we've got coming up."

"If it was a final we would've taken this risk, it wasn't worth it with the amount of games still to play and with a lot at stake."