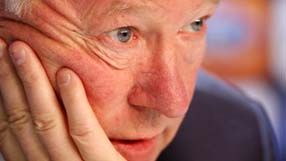 In a statement, the FA said Ferguson had also been fined 30,000 pounds for his post-match comments which included him saying he "feared the worst" when he found out who was refereeing the match at Stamford Bridge.

The ban, which starts on March 22, includes the FA Cup semi-final against Manchester City at Wembley although it does not apply to Champions League matches.

"The Commission found the charge of Improper Conduct relating to media comments proven, following remarks made in relation to match official Martin Atkinson in post-match interviews after Manchester United's fixture with Chelsea at Stamford Bridge on Tuesday 1 March 2011," an FA statement said.

While a three-match ban was handed down on the 69-year-old Scot for his remarks about Atkinson, the FA's Independent Regulation Commission also invoked a suspended two-game touchline ban for a similar offence in October 2009.

As well as the Cup semi-final against City, Ferguson will also have to watch the potentially crucial title showdown at Arsenal on May 1 from the stands as well as the league matches against West Ham United, Fulham and Everton.

Ferguson's latest comments came after the 2-1 defeat at Stamford Bridge when he was annoyed that Chelsea's Brazilian defender David Luiz was not shown a second yellow card for a foul on striker Wayne Rooney.

"You want a fair referee, or a strong referee anyway - and we didn't get that," Ferguson told MUTV. "I must say, when I saw who the referee was I feared it. I feared the worst."

Ferguson has 48 hours to appeal against the ban.

West Ham United's manager Avram Grant is also in trouble with the FA after comments he made about referee Mike Jones after his side's FA Cup defeat by Stoke City at the weekend.

The FA said the Israeli had been charged with improper conduct and has until March 21 to respond.