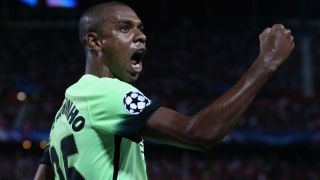 Fernandinho has mainly featured in midfield for City, but Guardiola has suggested he could play the 31-year-old in defence in 2016-17.

During his time at Bayern Munich, Guardiola converted regular full-back Philipp Lahm into a holding midfielder, and the Spaniard believes Fernandinho could also flourish in an alternative role.

"I think Fernandinho can play in 10 positions," Guardiola said at a news conference.

"He has the quality to play wherever. He's a quick, fast player, so intelligent, aggressive and strong in the air.

"He could play at centre back. He has the quality to create good build-up play. We think he can play there.

"I like midfielders to play at centre back because they can play good passes."

Guardiola is already loving life at City and has nothing but praise for his players' attitude.

"Every manager has their own ideas from the beginning to speak, to train, to know the way they want to live. That’s all.

"For the coaches it’s impossible to achieve a victory when the player doesn’t want it but that is not the case – they are great human beings and great players."