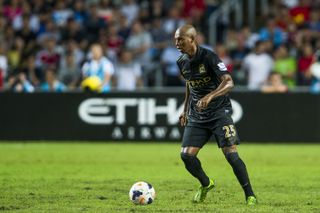 The Brazilian midfielder joined City in June from Shakhtar Donetsk for a reported £35million fee and is due to make his Premier League debut on Monday against Newcastle United.

According to the 28-year-old, both Chelsea and Tottenham were keen on securing his signature, but he was never set for a move to London.

"I know there were negotiations between Shakhtar and Chelsea. I don't know the details of those talks because I had already started speaking with City," he explained.

"Shakhtar made it clear that I was coming to Manchester. They told me that they had refused an offer.

"There was also a stage a year ago when I spoke to people from Tottenham but nothing came of that."

Fernandinho is one of four close-season signings made by City manager Manuel Pellegrini along with Jesus Navas, Alvaro Negredo and Stevan Jovetic.

Despite the spending spree which has taken place at the Etihad Stadium in recent months, Fernandinho insists he did not come to the club solely for financial reasons.

"If I only wanted money and a comfortable life, I would have stayed in Ukraine," he said.

"I was in Donetsk for eight years. I was happy there. I won six titles. I knew everyone and I was a big part of the club.

"But I was presented with the challenge of coming to Manchester City and I am aware that over the last few years this is a project which has grown a lot.

"In my country we say that football is like a huge plate of food. Well, I want to eat everything because I want to win every trophy I can for City."