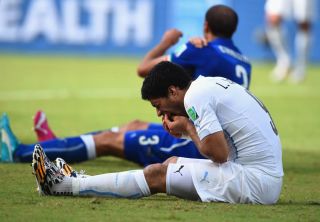 The Uruguayan Football Association stood by the Liverpool man and revealed that they would appeal against his suspension, while Chiellini and World players' union FIFPro voiced their opinion that the punishment was excessive.

Suarez has previously been suspended for biting PSV midfielder Otman Bakkal in 2010 and Chelsea's Branislav Ivanovic last year, and Valcke stated that his previous offences had to be taken into account.

"He should go for a treatment," Valcke said. "I don't know if it exists but he should do something by himself because it’s definitely wrong.

"If it's the first time, it's an incident. More than once, it is not any more an incident. That is why also the sanction, it has to be exemplary.

"It was seen by hundreds of millions of people. It is not what you want your kids, what you want the little (children) who are playing football around the world, to see at a World Cup."