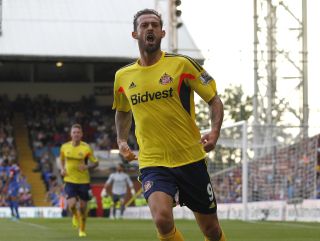 The result did move them off the foot of the table, though, and will doubtlessly have lifted their morale, too.

However, Fletcher, who played his first full 90 minutes of the season at the weekend, insists that there is still much work to be done to preserve the club's top-flight status.

"We've still got a long season ahead of us," the Scot told The Sunderland Echo.

"But now we just want to take the momentum from the derby into the next game at Hull (on Saturday).

"We've been able to use the boost from Sunday in training this week.

"But we know it's not one game, we've got a lot of matches coming up and we need to take this into the next ones."

Fletcher's return from a dislocated shoulder has provided a timely boost for Poyet, who took the reins on October 8 following Paolo Di Canio's departure.

There was a moment of concern, though, when the 26-year-old fell on his shoulder shortly before half-time, but Fletcher emerged for the second half unscathed.

"It would have been sore even if I hadn't done my shoulder because of the way I landed," he added.

"It was fine, it went away straightaway.

"Even when we were tiring, we knew we had a togetherness in the team and we were pushing each other.

"I was getting tired, but Jozy (Altidore) said to me 'come on', and I was doing the same with him.

"That's what we needed to do and then Fab (Borini) came on and scored an absolute screamer."