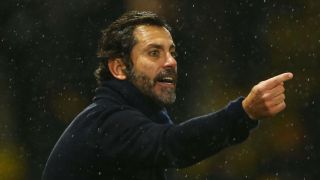 Watford head coach Quique Sanchez Flores admitted that his side produced their worst performance of the Premier League season so far in their 2-0 defeat to Southampton on Wednesday.

The Hornets lost for just the third time on their travels this year after a lacklustre display saw them punished at St Mary's.

Goals from Shane Long and Dusan Tadic ensured all three points for Southampton but Watford were unable to force a save out of goalkeeper Fraser Forster.

Forwards Odion Ighalo and Troy Deeney failed to cause problems for the Saints defence but Watford's defending was also called into question on a night to forget for the travelling supporters.

The defeat sees Watford drop down a place into 10th and Flores was quick to apologise to the club's fans after the final whistle.

"We didn't hit the level of other matches. We didn't play well. It was the worst match we've played in the Premier League," he told BBC Sport.

"Southampton played much better. I am sorry for the first half. I apologise to the fans. It's the first time in the season we failed to find the level.

"We didn't play our style on the pitch. The players can make mistakes - it's football."