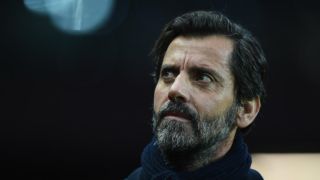 Watford head coach Quique Sanchez Flores says his side will return to winning ways in the Premier League if they replicate their second-half performance in the 1-0 defeat at Swansea City.

Flores' men were beaten for a fourth successive league game on Monday as Ashley Williams headed in the winner after 27 minutes at the Liberty Stadium.

Watford attempted to rally in the second half but failed to halt a losing Premier League run that stretches back to a 2-1 defeat at home to Tottenham on December 28.

Prior to that result, Watford strung together successive wins against Aston Villa, Norwich City, Sunderland and Liverpool, with Flores eager rediscover that momentum at Vicarage Road.

"I'm obviously very disappointed with the result, in the first half we lost a bit of balance in a couple of areas in the system," he told Sky Sports.

"We suffered a little bit without the ball and lost a bit of control but I am really happy with our performance in the second half.

"In the second half we pressed very high, created attempts - we have to accept the result but the team came back to a good performance.

"Football is a bit cruel with us in the last few matches, we didn't deserve to lose but we are working in the same way," he added, referring to defeats away to Southampton and at home to Manchester City, the latter a particularly painful late collapse.

"We are always working against amazing teams with amazing players so for us it is always difficult.

"We work in [the] same way, stay humble and know that the target is not far away. We think that if we repeat the performance of the second half we are closer to winning the next match."

Watford are at home to relegation-threatened Newcastle in the league next Saturday.