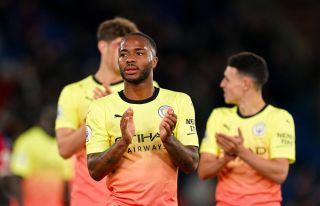 Raheem Sterling lined up as part of Manchester City’s midfield as the club looked to bounce back from their defeat to Wolves and move closer to table-toppers Liverpool.

The English forward was a joint winner of the league’s golden boot last season with 22 goals and has enjoyed an impressive start to this campaign with six goals from his first nine Premier League matches.

Sterling has enjoyed a good record against Crystal Palace in recent years, with six goals from his last six matches in all competitions against the Eagles.

Here, the PA news agency takes a look at how the England international fared as City beat Palace 2-0 at Selhurst Park.

Sterling did not start the game at his best and looked frustrated on the wing in the early stages, but was sparked into life following Gabriel Jesus’ opening goal. For his side’s second goal, Sterling took a touch at the edge of the box before expertly scooping the ball over the top of the Palace defence for David Silva to run on to and tap home.

56. We've had chances to extend our lead in a very open second half so far! @sterling7 comes closest to doing so, clipping the outside of the post after some fine work from @gabrieljesus33.— Manchester City (@ManCity) October 19, 2019

In the second half the 24-year-old looked a much more attacking threat, cutting in from the wings regularly, although he failed to get his name on the scoresheet despite numerous chances. In the 52nd minute, Sterling looked to improve on his goalscoring record against the Eagles with a strike that hit the woodwork. With the game drawing to a close, the City forward swept the ball wide from just eight yards out.

Sterling took time to grow into the game, but his vision for the second goal showed his insight and skill, although he was overshadowed in attack by Jesus. In the first half, Sterling showed his defensive worth, tracking all the way back to the edge of his own area to make an important tackle on Wilfried Zaha with the scores level. However, at the start of the second half, Sterling made a late challenge on Joel Ward and was given a yellow card, but not before squaring up to the defender.