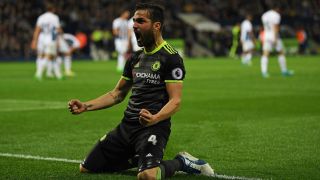 Substitute Batshuayi became Chelsea's unlikely hero as his first Premier League goal since August spurred scenes of ecstasy among the travelling supporters in the 82nd minute at The Hawthorns.

It marks an incredible turnaround in fortunes for Chelsea, who finished 10th last term, and Fabregas - who has now won the top flight in two of his three seasons at Stamford Bridge - barely managed to contain his jubilation.

"I thought it was going to be one of those days," the former Barcelona and Arsenal man told Sky Sports. "We had so many chances in the first half.

"Maybe we felt a bit nervous but then we got the chance and for it to be Michy who scored, that's football. That's football. Football is f******* unbelievable."

Batshuayi, who joined Anotino Conte's side from Marseille in the off-season, had been something of a forgotten man this campaign, but fellow Belgium international Thibaut Courtois said the Chelsea squad never doubted the striker's quality.

"Because we didn't have the Champions League, there wasn't as much football," Courtois added.

"Some players didn't get many minutes but he [Batshuayi] took his chance and I am really happy for him.

"Last year was so bad, so to bounce back and win the league in such a way is amazing."

Chelsea will lift the Premier League trophy in the final game of the season against already-relegated Sunderland, before switching their focus to the FA Cup final against Arsenal.