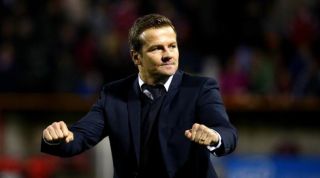 Mark Cooper's side have the opportunity to take over at the summit with Steve Cotterill's league leaders in action at Doncaster Rovers in the third round of the FA Cup.

Swindon head to Highbury Stadium on the back of a 1-0 victory over Port Vale, which was their sixth win in their last seven games in the third tier.

The Wiltshire outfit have secured seven away victories already in League One this season and an eighth would put them two points clear of Bristol City.

Fleetwood ended a five-game winless run with a 2-0 triumph at Rochdale last time out and they could move into the top six with a victory this weekend.

Managerless Gillingham start life after Peter Taylor with a trip to Vale Park on Saturday.

The Kent club sacked manager Taylor on New Year's Eve as they languish just one place above the relegation zone, so Andy Hessenthaler has taken over as caretaker boss.

Taylor was in charge for 14 months and chairman Paul Scally revealed that pressure from supporters had prompted him to relieve the former England caretaker manager of his duties.

Walsall will attempt to build on their impressive 3-0 win at MK Dons when they host Coventry City in the other League One game to be played on Saturday.

Burton Albion host leaders Shrewsbury Town in the game of the day in League Two on Saturday.

Shrewsbury were held to a goalless draw by second-placed Wycombe Wanderers on Sunday and are just a point ahead of third-placed Burton.

Jimmy Floyd Hasselbaink's Burton side were 2-0 winners over Tranmere Rovers on Boxing Day and should be refreshed after their clash at Accrington Stanley on Sunday was postponed due to a frozen pitch.

Wycombe will be expected to end a run of three consecutive draws by beating bottom side Hartlepool United at home, while fifth-placed Newport County will move up to third spot if they beat Carlisle United and Burton lose as Luton Town play at Cambridge United in the FA Cup.

Exeter City host Accrington, Morecambe face Stevenage and Oxford United are at home to Cheltenham Town in the other League Two matches to be played on Saturday.