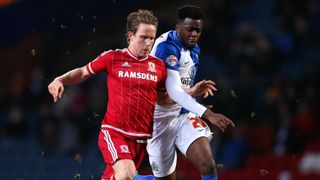 Middlesbrough missed the chance to go top of the Championship table after slipping to a 2-1 defeat away at Blackburn Rovers on Tuesday.

Goals from Hope Akpan and Danny Graham helped the hosts to victory at Ewood Park, meaning Adam Forshaw's 90th-minute effort was no more than a consolation for the third-placed visitors.

In League One, Burton Albion extended their lead at the summit to four points courtesy of a 1-0 victory over Sheffield United. Lucas Akins scored the only goal of the game after 49 minutes, securing Nigel Clough's side a first win in three outings.

Wigan Athletic failed to keep pace with Burton after being held to a 0-0 draw away at Millwall, while Walsall climbed to third place despite a 0-0 draw at home with Scunthorpe United.

At the foot of the table, Shrewsbury Town moved out of the relegation zone with a 2-0 triumph against Rochdale. There was also a positive result for bottom club Colchester United, as they were 2-1 winners away at Bradford City.

League Two leaders Northampton Town had to settle for a 1-1 draw at home to AFC Wimbledon, although they still hold an 11-point lead.

Oxford United are now Northampton's nearest rivals after they thumped relegation-threatened York City 4-0. Plymouth Argyle had been in second spot, but they were beaten 1-0 away at Barnet.

At the foot of the table, Dagenham and Redbridge ended a five-match losing streak with a 0-0 draw at Notts County. However, they remain seven points adrift of safety.