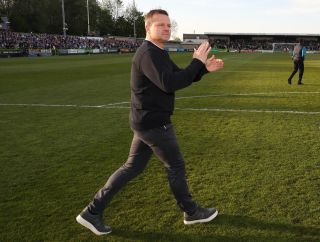 Forest Green boss Mark Cooper believes his side were rewarded for the risks they took at the back during tonight’s memorable 5-3 Carabao Cup penalty shoot-out win at Championship side Charlton.

The League Two visitors rode their luck at times as the game finished 0-0 in normal time before going to spot-kicks.

It was left to substitute Shawn McCoulsky to score Forest Green’s decisive penalty, a former Millwall youngster who used to work serving burgers on matchdays at The Valley as a youngster.

But it was Wollacott who was singled out for praise from the manager afterwards.

Cooper said: “It is not bad for his debut! We’ve got three good keepers and that was highlighted tonight.

“Jojo has come in tonight and kept a clean sheet.

“We scored five out of five. We can’t do any more than that.”

He added: “I thought it was a really bright performance because we had a really young team tonight.

“That’s what we are about. There was no fear today, they stuck to our identity.

“We took a lot of risks with the ball at the back with the goalkeeper but I thought they were exceptional.

“There were some hairy moments but I thought we deserved it.

“Some of the performances were outstanding – that should give them all the confidence in the world.

“We ask a lot of our players in terms of the risks we take and how we think the game should be played.”

Addicks manager Lee Bowyer named an entirely different starting XI to the side which beat Stoke 3-1 in the Championship at the weekend, a gamble which ultimately did not pay off.

Bowyer said: “The pros are nobody got injured, some players got good minutes into them.

“Chuks Aneke needed that and came through unscathed so that is good. Our keeper Ben Amos did well, as did Naby Sarr.

“They are probably the two players who can look me in the eye and say they did well tonight.

“But the rest of them I don’t think did well enough. We’ve got good players in the squad and healthy competition for places.

“So when the other lads who didn’t start on Saturday get the opportunity like they did tonight I want them to have the attitude that ‘I’m going to be the best player on the park’ and show myself I want to play this Saturday.

“I want them to grab these opportunities and for one reason or another too many of them didn’t do that tonight. That’s the disappointing thing for me about tonight.”