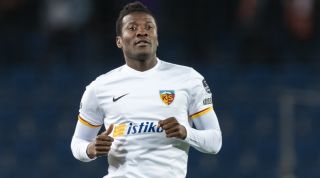 Asamoah Gyan has told FourFourTwo that he wants to return to Sunderland and help them back to the Premier League.

The Black Cats have slipped from the top flight into League One in recent seasons, and must now go into the play-offs after missing out on automatic promotion from the third tier.

Gyan netted double figures for Sunderland when they finished in the top half of the Premier League in 2010/11, after arriving for a club record £13m, and the 33-year-old has fond memories of his time at the club.

So upset has he been to see Sunderland’s decline, that he has offered to help in some capacity once his playing days come to an end – the Ghana star is currently playing in Turkey for Kayserispor.

In an exclusive interview in this month’s special 25th anniversary issue of FourFourTwo magazine, Gyan said: “I enjoyed every single minute there. It’s one of my proudest moments in life to have played at such a great club in such a unique football country.

“The fans were unbelievable through thick and thin. Day and night, they’d travel to see us play – man, it was something else.

“It’s sad to see what happened to my old club, but the club’s spirit will bring it back. It’s not a club made for the lower divisions. I plan to help in any small way I can after I hang up my boots.

“I’m planning a lot of things when I retire. I have plans to start an airline company, and that’s getting closer. I have investments in Africa, too. But I’ll always be in football. You never know, I may play a role for Sunderland soon. I would love to help.”

Read the full interview with Asamoah Gyan in the June 2019 issue of FourFourTwo, a 25th anniversary special. We speak to Bournemouth boss Eddie Howe, who appeared in issue 5 of the magazine in 1994 as a Cherries trainee, about his and the club’s rollercoaster quarter of a century, and hail the 101 greatest players of FFT’s lifetime. Plus, we talk to Leicester creator-in-chief James Maddison, share some unseen Pele pictures, ask Gaizka Mendieta your questions, and meet YouTube’s maddest fan Mark Goldbridge.