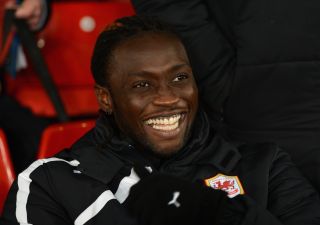 Manager Ole Gunnar Solskjaer has brought in striker Kenwyne Jones as the Norwegian bids to halt a run of poor form that has seen the Welsh club slump to the foot of the table.

Solskjaer also looks set to land deals for Manchester United duo Fabio and Wilfried Zaha, and will be hopeful of doing so before Saturday's visit of Chris Hughton's men.

Cardiff were on a four-game winless run in the top flight when Malky Mackay departed, and his successor has since overseen three consecutive league losses as part of a sequence of one just win in their last 13 top-flight fixtures.

That run has left them three points adrift of safety in the club's first season in the Premier League, and in desperate need of a victory.

Norwich recently ended a six-match spell without a maximum points haul, the 1-0 victory over Hull City being followed by a goalless draw against Newcastle United.

The Carrow Road outfit also received a boost ahead of the trip to Wales when Bradley Johnson had the red card he received against Newcastle overturned on appeal.

Hughton will be eyeing just a third away triumph of the season against a Cardiff side who have struggled for goals, scoring just 17 in 23 matches.

The introduction of Jones will ease the burden of Fraizer Campbell, who is Cardiff's top scorer in the league with five goals.

Trinidadian Jones also has five for the season, but all those came for Stoke in cup competitions against lower division sides.

Fellow striker Jo Inge Berget, signed from Solskjaer's former club Molde last week, was an unused substitute in the 2-0 midweek loss to Manchester United and may also come into the reckoning this time.

Jordon Mutch lasted 52 minutes at Old Trafford before being withdrawn with a knock, but he has not been ruled out of action.

Defenders Michael Turner and Elliot Bennett (both knee) remained sidelined for Norwich, along with midfielder Jonathan Howson (back), but loanee Jonas Gutierrez can return after being ineligible to face his parent club Newcastle.

The meeting between the two sides at Carrow Road in October ended 0-0, with Cardiff indebted to a superb display from goalkeeper David Marshall for earning them a point.