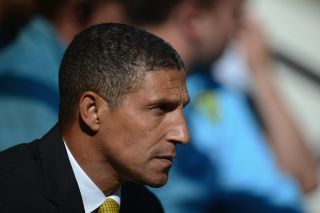 Norwich City manager Chris Hughton will hope his men can kick-start their season with a win over fellow strugglers Cardiff City on Saturday.

The Premier League side have had a shaky start to the new campaign, winning just two of their opening eight fixtures, and now languish in the bottom three.

Their defence has also struggled of late, shipping seven goals in their previous two matches against early high-flyers Chelsea and Arsenal, who beat them 3-1 and 4-1 respectively in the last few weeks.

But Cardiff have also lost their last two games and sit just one place and one point above their hosts.

Malky Mackay's men, like their opponents, slumped to a 4-1 defeat versus Chelsea that saw a controversial incident involving goalkeeper David Marshall that led to the London side's equaliser.

The 28-year-old bounced the ball in the area, shortly after Jordon Mutch had put Cardiff ahead, only to see Samuel Eto'o stab it away from him, with Eden Hazard eventually firing home.

arshall will want to put that episode behind him when he returns to the club that he left in 2009 after making more than 100 appearances for the Carrow Road outfit.

History narrowly favours the hosts, with the previous 10 meetings between the two teams ending in victory for Norwich five times, with two draws and three Cardiff wins making up the other results.

This encounter will be the first time they have faced each other in the top flight, however, and Hughton will hope to welcome striker Ricky van Wolfswinkel back into the side after a foot injury ruled him out last weekend.

The 24-year-old, who joined from Sporting Lisbon in the close-season, has become an integral part of the manager's plans, starting seven of the opening eight fixtures and netting against Everton in the league opener.

Hughton confirmed that he will need to undergo a late assessment ahead of the clash, though, while also revealing that fellow-striker Johan Elmander will be available after re-joining training following a thigh complaint.

Cardiff boss Mackay, on the other hand, does not have any new concerns, with long-term absentee Andreas Cornelius still out after suffering an ankle injury in pre-season.