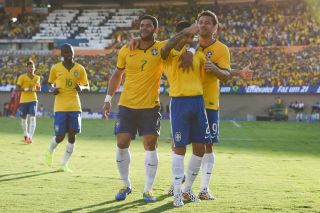 Luiz Felipe Scolari's Brazil made light work of Panama, triumphing 4-0 in an international friendly at the Estadio Serra Dourada in Goias on Tuesday.

Neymar, Dani Alves, Hulk and Willian all found the back of the net as Brazil won their eighth consecutive match - a streak that has seen them score 29 goals and concede just two.

The match was Brazil's penultimate warm-up game before they host Group A opponents Croatia in the World Cup opener on June 12 and Fred believes the pre-tournament favourites must use the overwhelming pressure as a positive.

"This match was an important part of our preparation, and we were feeling the pressure a little," the Fluminense front man said post-game.

"The atmosphere was immense and it was very hot and the other team was playing very defensive. Panama sat behind the halfway line and this made our life more difficult.

"I think we need to have a good mentality for the tournament, we know the responsibility to play a World Cup at home and what it means to wear this shirt."

Fred added: "We need to understand that our hard work is very important. We can't react to the extra pressure placed on us by the fans because it can be even worse during the games.

"We already have this pressure, but we need to change this into a positive, we need to distract from this focus and start the matches without pressure, just as we did in the Confederations Cup."

Brazil host Serbia on Friday before kicking off their World Cup campaign in Sao Paulo.