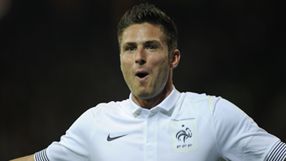 The 25-year-old completed a medical on Monday and his contract officially starts on July 1, the north London team said on their website on Tuesday.

"The completion of the transfer is now just the subject of formal processes," said Arsenal who finished third in the Premier League last season to secure a place in the Champions League.

The club did not disclose the transfer fee but media reports said it was around 12 million pounds.

Giroud helped France reach the quarter-finals of Euro 2012 in Poland and Ukraine.

His 21 goals from 36 league games made him joint top scorer in the French league last season with Paris Saint-Germain's Nene.

"We are delighted to have secured the signing of Olivier Giroud," said Arsenal manager Arsene Wenger.

"He has a very good physical presence and is exceptional in the air with a great work ethic," added the Frenchman.

"We are excited about Olivier joining us and he will add an additional dimension to our attacking options next season."

Giroud said it had been a dream of his to play in the Premier League.

"I am delighted to be part of one of the great teams in English football," he said. "I was attracted by the philosophy of football here and Arsene Wenger's 'touch' at this club.

"I now hope to achieve great things. I'm very proud to be a Gunner and I will give my best for all the Arsenal fans."