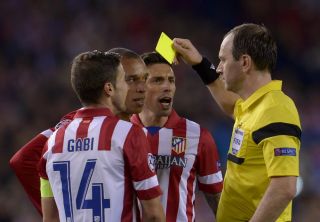 The hosts were frustrated in Tuesday's clash at Vicente Calderon, with Chelsea boss Jose Mourinho setting his side up to defend and leave the Spanish capital with a clean sheet.

The game plan worked well, with visiting goalkeeper Mark Schwarzer - on as an 18th-minute substitute for the injured Petr Cech - only called on sporadically to make routine saves.

Skipper Gabi, who was booked in the second half and will now miss next week's return clash at Stamford Bridge through suspension, was left disappointed with the final scoreline.

"Atletico wanted to win from start to finish," he said.

"We knew they would not concede a goal easily and we come away with a bad taste."

Gabi's team-mate Juanfran, meanwhile, believes the first-leg result sets the tie up perfectly for the second game in London.

"We are not happy, we wanted to get the win," he said.

"They played a defensive game because they think they can win at Stamford Bridge.

"We also think we can win. I knew that (it) wouldn't be easy. (The result) means it will be a great match at Stamford Bridge."