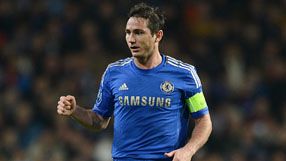 Lampard has been linked with a move to David Beckham's Los Angeles Galaxy, with his current Chelsea contract expiring next summer.

The 34-year-old would be allowed to sign a pre-contract agreement with another club in January, but MLS chief Garber has revealed no move has yet been made for the England midfielder.

"I get asked more about Frank Lampard here than I do in the US," he said, speaking at this year's Leaders in Football Conference at Stamford Bridge. "I don't think many people there know who he is - that's what we're dealing with.

"But I'm not aware of any talks going on."

Should Lampard join Beckham at Galaxy he would be considered under the Designated Player Rule, designed to help MLS clubs work around the current salary cap to compete for big-name players.

Garber would be involved in such a deal if it arose, but first the California-based side must make contact with the Chelsea man.

"That's a discussion that starts with ownership at the local level, and the league certainly would be involved at some point," said Garber. "But a local team owner would have to decide that they would want him on their team."