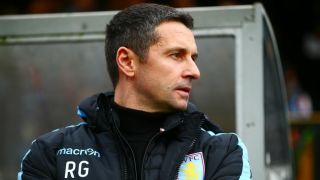 The ex-Lyon head coach has failed to turn around the Premier League bottom club's fortunes since taking over in November, with Saturday's FA Cup third-round draw at Wycombe Wanderers extending their run to 16 matches without a win.

Frustrations came to a head during the 1-1 draw against the League Two team, with Micah Richards clashing with supporters, who also chanted against Garde.

But Republic of Ireland manager O'Neill, who spent four years at Villa between 2006 and 2010, called on fans to reserve judgement on the Frenchman for a while longer.

"You are asking about Remi Garde - he will not have had a chance yet to get to know the players that well," he said to BT Sport.

"He will hardly even know the strength of the reserve side. You need a bit of time to get things going and that is something that is not being given to anyone now.

"Twenty or 30 years ago of course managers were still getting the sack, but even poor managers were getting a length of time to do something.

"You don't turn this situation around in two or three weeks but because of the money and because of the situation, everyone gets into a panic. Suddenly you start to feel that pressure when you have just arrived.

"So just get a win, get a win from somewhere but that is easier said than done now because their run has been so long without it."

O'Neill pointed out that confidence must be so low in the Villa dressing room, with even the global political and economic picture significantly different now than it was when they last won in the Premier League.

"They have not won a league game since the opening day down at Bournemouth," he said.

"Life has turned upside down in that time - politically, economically and everything, if you think the last time you have won a game is in August, that erodes confidence.

"People talk about lack of team spirit - even the best teams with team spirit, if they go that length of games without winning that starts to erode and you have a problem.

"Aston Villa are a big club, a fantastic club. They have won the European Cup, it is an historic football club and a magnificent club.

"When everything is in place, they should be challenging. The crowd are there, the set-up is absolutely there and they should not be languishing at the bottom of the league."