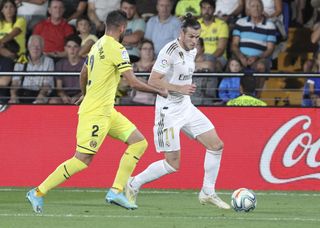 Gareth Bale scored his first goals since March and was shown a late red card as Real Madrid were held to a 2-2 LaLiga draw at Villarreal.

Wales forward Bale, on the sixth anniversary of his £85million move to the Spanish capital, salvaged a point for Real by twice levelling at El Madrigal.

But the 30-year-old’s evening ended on a sour note as he picked up a pair of stoppage-time yellow cards for late challenges and was dismissed.

Bale, who was denied a summer switch to China amid reports of a fallout with manager Zinedine Zidane, finished a flowing team move in first-half added time to cancel out Gerard Moreno’s opener, before cutting in from the right to fire home four minutes from the end after Moi Gomez had put the hosts back in front.

Ahead of kick-off, there was an emotional minute’s silence in memory of the nine-year-old daughter of former Spain and Barcelona coach and Real Madrid player Luis Enrique.

The visitors started on the front foot and a whipped cross from Bale forced former Real defender Raul Albiol to head over his own crossbar.

Great character shown by the boys tonight. Disappointed to get sent off late on but we go again after the international break! #HalaMadridpic.twitter.com/SzYzCVl8UI— Gareth Bale (@GarethBale11) September 1, 2019

But Zidane’s side fell behind with 12 minutes on the clock after Sergio Ramos was caught dawdling.

Gerard dispossessed the indecisive Ramos just inside Real territory and raced forward to slip in Karl Toko Ekambi. The Cameroon international’s attempted finish was weak and was pushed away by Thibaut Courtois, only for in-form Gerard to slam home the rebound for his third goal in as many games.

Real dominated the opening period but were struggling to hit the target as Bale curled over from a free-kick, Casemiro headed wide from close range and Lucas Vazquez smashed into the side netting following a scramble.

Karim Benzema’s thumping drive then rebounded off the left post, before Bale levelled just before the half-time whistle.

Bale had scored a debut goal for Real on this ground in 2013 following his move from Tottenham on September 1 of that year.

This was his first Real strike in 10 appearances, dating back to March 16, and he thought he had created a goal for Benzema in the 63rd minute.

Germany midfielder Toni Kroos had, moments before the disallowed goal, been denied by a double save from Fernandez, but Real were behind once more with 15 minutes to go.

Courtois once again repelled the initial effort, a powerful drive from Gerard, before substitute Javi Ontiveros crossed for Gomez to slot home.

The visitors looked set to slip to a frustrating loss but Bale earned a point four minutes from time, cutting in from the right to beat Fernandez at his near post after good work from his former Spurs team-mate Luka Modric.

After such a positive contribution, Bale blotted his copybook in stoppage time by being sent off for two needless tackles in the space of three minutes.