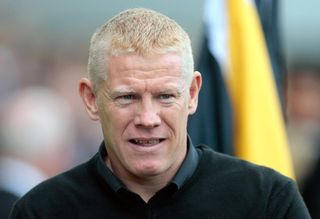 Livingston manager Gary Holt insists taking on the bottom six’s best side was the perfect moment for him to test the strength of his squad for next season.

The Lions boss made six changes for the meeting with St Johnstone and after seeing his revamped team go behind to Michael O’Halloran’s superb fourth-minute opener, Holt was rewarded with an admirable draw following a sensational late equaliser from skipper Craig Halkett.

Halkett, who has agreed to join Hearts this summer, is one of a number of players set to leave the club this month, with fellow defender Declan Gallagher joining Motherwell and speculation surrounding the future of goalkeeper Liam Kelly.

Kelly was consigned to the bench so that Holt could assess back-up goalie Ross Stewart on his debut, while there was also a first start in over four months for striker Lee Miller following injury.

Holt said: “I couldn’t have told you it was six changes but I’m fortunate enough in the position we’re in that I can have a look at boys.

“I’m saying that without being disrespectful to the league and other teams, and what we’ve done ourselves with the success we’ve had.

“I need to have a look at players, I need to know.

“No disrespect, but us playing at home next week against Dundee, where our record is phenomenal, we might not be as tested as much.

“So, coming to the team that’s top of our pile, away from home, is going to be a test and that’s why we did it.

“It shows you can’t rest on your laurels if you’re in the starting 11 because you’ve got boys who are hungry and wanting to play. Everybody showed they want to play at this level.”

St Johnstone manager Tommy Wright said: “It was disappointing at the throw-in (before their goal). That’s when I need somebody to take leadership out on the pitch and organise it a little bit better.

“I need somebody to have a calm head and see where the problem was. The problem was we wanted spare men in the box and we didn’t need that.”