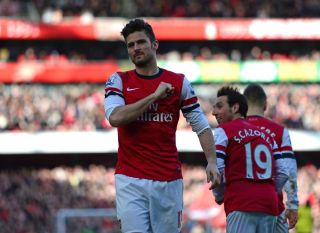 Giroud has endured a turbulent season at the Emirates after revelations he had slept with a model the night before the club's home fixture against Crystal Palace on February.

The married Frenchman was subsequently dropped by manager Arsene Wenger, although he has started Arsenal's past two matches.

That has not stopped speculation regarding his future in London, with reports linking him with a move away following his off-field indiscretions.

However, the 27-year-old has quashed talks of a possible departure, stressing he has no intention of leaving the Premier League side.

"You shouldn't listen to that," he said. "A lot of things were said.

"I'm still happy in London and with Arsenal and think I will be in the future.

"I have a contract until 2016 and I'm an Arsenal player. I want to be here next season, at least that's my will."

Another key Arsenal figure whose future remains unclear is Wenger.

The Frenchman is out of contract at the end of the season and is yet to give any reassurances that he will continue his long stint at the club.

With Arsenal occupying fourth spot in the standings and their Premier League trophy drought continuing, some believe it is time for a change of manager.

But Giroud, who was signed by Wenger from Montpellier in 2012, is determined for the 64-year-old to stay put.

"Of course we all want him (Wenger) to continue the adventure," said Giroud.

"I'm sure that next season we can challenge for the title - I hope, right until the end (of the season) - and we need the coach. We need his experience. He must stay."