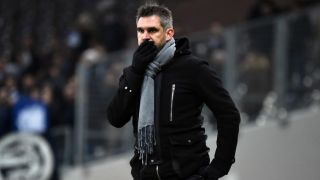 Bordeaux have announced that Jocelyn Gourvennec has left his role as head coach.

The 45-year-old, who took charge in May 2016, has endured a miserable run of results this season.

Tuesday's 2-0 defeat at home to Caen was Bordeaux's seventh in their last eight matches in all competitions and left them in 13th in Ligue 1, just two points above the bottom three.

Coach Eric Bedouet has been placed in temporary charge of the first team before a permanent successor is named.

"As of today, Jocelyn Gourvennec no longer assumes the responsibility of coaching the first team," a Bordeaux statement confirmed on Thursday.

"Eric Bedouet takes charge of the group, pending the appointment of a new coach, who will take charge soon."

Former Club Brugge boss Michel Preud'homme has been tipped to replace Gourvennec at the Matmut Atlantique.