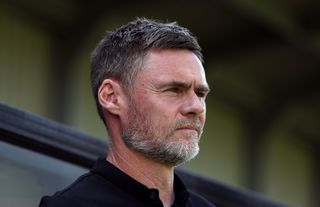 The Ammies won 4-2 on penalties after a 1-1 draw, new goalkeeper Vaclav Hladky saving from Joe Mattock to cap an impressive display.

The home side thought they had stolen the game in normal time when Ian Henderson gave them a late lead from the spot against the run of play. But an injury-time equaliser from Matt Crooks which Alexander felt should have never been allowed meant the League Two side had to hold their nerve to win it on penalties.

“I was gutted for the guys to concede that goal, “ said Alexander.

“It was a ridiculous goal, taken out of our control. A blatant foul on the keeper but we stepped up to put that to one side and take the penalties well. As a team we stood up to the test.

“The league is our focus but I was delighted with how the players performed. The number of games now is a bit of a headache as we don’t have a big squad and all our fit players played today.

“For me tactical intelligence and being able to take what you learn in training out on to a football pitch is the most important thing and to a man we did that. We needed the full squad of players and I’m delighted for them as they’ve worked exceptionally hard in the last five weeks. They’ve looked after themselves really well.”

Rotherham dominated the game for an hour but could not find their way past inspired goalkeeper Hladky, and their boss Paul Warne could not believe his side crashed out.

“I don’t think my keeper had a save to make but we still go out so I’m disappointed in that,” he said.

“We had good pockets of play. We weren’t at our best and I don’t think there’s any excuse for that.

“But I think we did enough to win a football game and their keeper made some unbelievable saves, came for crosses and kept us at bay.

“It’s all about scoring goals, they got one, we got one at the death and on the merit of play we probably deserved to win but football isn’t always like that.

“I’ll watch it back and try to pick the pieces apart tomorrow when I’m not so emotional about it.

“Overall I’m disappointed we didn’t take our chances but it’s our job to pick the players up and try and help them. “