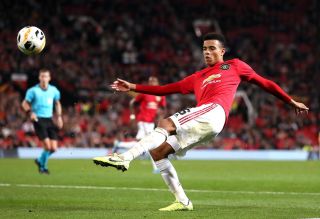 Back in the competition for the first time since lifting the trophy two years ago, the Reds’ gruelling road to Gdansk got off to a surprisingly uncomfortable start against the perennial Kazakhstan champions.

An embarrassing European result was looming large in front of an increasingly frustrated Old Trafford crowd, only for teenager Greenwood to produce a moment of magic and secure a 1-0 win.

Solskjaer will be relieved to have got Group L off to a winning start, although will surely be alarmed by the way his side’s performance dropped off after Fred hit the woodwork and Marcus Rashford saw early efforts denied.

Perhaps the disjointed display should not come as a surprise given teenagers Tahith Chong, Angel Gomes and Greenwood were all handed starting roles as United named their youngest European line-up since 2012.

The latter would eventually save the day – and show just why Solskjaer called him one of the best finishers he had seen – by confidently making space and smashing home in front of the Stretford End, becoming the first player born this millennium to score for United.