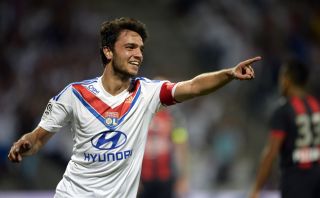 Remi Garde's men slipped to a 4-0 aggregate defeat to Spanish side Real Sociedad in the play-off round, losing 2-0 at the Anoeta Stadium in the second leg after succumbing by the same scoreline at the Stade de Gerland a week previous.

Grenier, who has reportedly attracted the attention of a number of clubs including Premier League side Arsenal, had previously promised to stay at Lyon this season as long as the club could offer Champions League football.

The Rhone club's departure from the competition is likely to spark interest in a number of their players, with Newcastle United said to have renewed their interest in striker Bafetimbi Gomis.

However, in spite of Lyon's failure to reach the group stage, 22-year-old Grenier has clarified his future, stating categorically that he will not be leaving in the this transfer window.

"There is no question to ask. I will stay at least one more season," Grenier told RMC Sport.

"It will be complicated (when I want to leave), but then I must ask the president. But I am happy in Lyon."

Grenier performed superbly in the second half of last season - scoring seven goals and providing five assists - to help them reach the third qualifying round of the Champions League, and has started the new campaign in similar fashion, scoring against Grasshoppers and Nice.