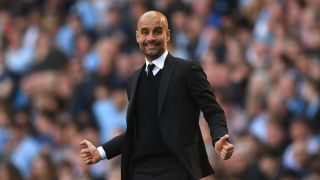 Manchester City boss Pep Guardiola feels there is no need to take retrospective action against diving and believes making video technology available to referees should have been a bigger priority for the Football Association (FA).

The FA announced this week that a panel will review television footage starting from the 2017-18 campaign in an attempt to erase diving from the game, with players found guilty of diving likely to face bans of up to two matches.

Premier League managers Sam Allardyce and Paul Clement have spoken out against the move, with Guardiola now joining them.

"I think diving is not the most important thing to improve. There are many other things we can improve," Guardiola stated at a news conference.

"Everybody makes mistakes. Are we going to review the referees? No. It sometimes happens.

"The technology will help the referees to be fairer about what happens in the game to make fewer mistakes because there are a lot of mistakes. Football today is quicker, it is faster. Before referees arrive to see a situation, the players are much, much faster, that is why they need technology.

"There are mistakes but not ­because the referees are bad. The players used to run six kilometres a game, now it is 12 kilometres. It is double. Today we have to be better prepared. The referees do not have to improve, it is just that the game is quicker."