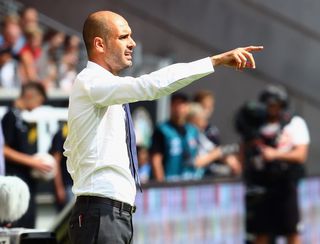 The Spaniard saw his team earn overcome Eintracht Frankfurt 1-0 away from home on Saturday, thanks to Mario Mandzukic's effort and some staunch defending.

The Croat slammed home a volley after an impressive cross from Thomas Muller after just 13 minutes, and the visitors had to work hard to maintain their advantage.

But despite Frankfurt coming closest to an equaliser just before the conclusion of the first half, when Alexander Meier's goal was ruled offside, Bayern held on to make it two wins from two league games.

After winning their first game of the season 3-1 against Borussia Monchengladbach, Guardiola is delighted with his side's progress.

"We had much more control over the game compared to last week. We allowed Gladbach far too many chances on the break, but it was much better today," he told the club's official website.

"It's never easy after an international break, because we only had three days together.

"But we still created plenty of chances. I’m happy and 100 per cent satisfied."

Manuel Neuer was delighted to keep his first competitive clean sheet of the season, insisting that taking the spoils were the champions' sole focus.

"We were determined to win today and come away with the three points," the goalkeeper said.

"We weren’t here to play pretty football or celebrate the game, we wanted our second Bundesliga win of the season, and we’ve got it."