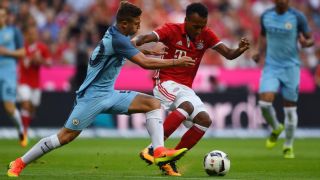 Pep Guardiola was satisfied with his Manchester City youngsters in the 1-0 friendly defeat to Bayern Munich – singling out rookie full-backs Pablo Maffeo and Angelino for special praise.

Guardiola named an experimental line-up for his first game in charge of the Premier League side, back at his old stomping ground of the Allianz Arena, with numerous key first-team players yet to return following international commitments.

City were indebted to goalkeeper Willy Caballero for a string of fine saves during the first half, when a Bayern XI inspired by Franck Ribery made their extra experience and quality count.

The introduction of more seasoned performers such as Yaya Toure, Wilfried Bony and Fabian Delph helped City to exert a measure of control after the break but a deflected attempt from Bayern youngster Erdal Ozturk 15 minutes from time proved decisive.

"Sometimes it is not easy but I am so happy," Guardiola told BT Sport after a match where he was particularly taken with the industrious showing from his two teenage Spanish defenders.

"We did many, many things that we spoke about in the right moments. We did them well. I am happy about many things.

"We cannot forget about the fact of which team we played, with eight or nine top players.

"Of course Brandon Barker, Oleksandr Zinchenko  – we need them to play in these games to see how their level is and find out whether during the season we can use them."

Guardiola was afforded a warm welcome just two months on from bringing down the curtain on a trophy-laden three seasons in Bavaria and he was visibly delighted to be back in familiar surroundings.

"I spent three years, my family were so happy here so to see the people was good."