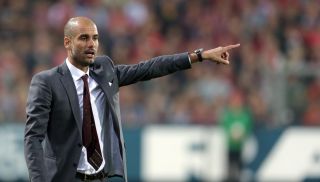 Speaking ahead of Friday's UEFA Super Cup against Chelsea on Friday, the Spaniard was insistent he has much to do at the Bundesliga champions.

But Guardiola - who was reportedly courted by Chelsea for some time while at Barcelona - was clear on his intention to manage in the Premier League at some point.

Guardiola said: "Chelsea has a super trainer. Bayern too. And I am happy to be here.

"I don't know if it's true, but I think Mourinho is happy to be there.

"I feel I am a young trainer, just 42 years old and just four years as a trainer in a professional world.

"Before I finish my career, sooner or later, I would like to go to England as a trainer, but in a few years.

"I would like to, first of all, remain as long as possible at this club because I've understood quickly how important this club is for the people, not only in Munich, in Germany and all around the world. I will try to do as best as possible.

"After that, I'd like to live this experience. But Chelsea have a good trainer now."

Guardiola had an often-fractious relationship with Chelsea manager Jose Mourinho during the pair's time in Spain.

With Guardiola in charge of Barcelona, and Mourinho at rivals Rea Madrid, the pair clashed, but the Bayern manager spoke of his admiration for his counterpart on Thursday.

"He is always very, very good ... with quick counter attacks ... he is a master at that and everybody knows he is an excellent, excellent trainer," he said.

"I have lots and lots of respect for his career and I have to try to learn from all the coaches around the world."

Bayern are still sweating on the fitness of midfielder Bastian Schweinsteiger, who suffered an ankle injury in the club's 1-1 Bundesliga draw with Freiburg on Tuesday.

"Bastian is better but we are going to ... check and evaluate his ankle," Guardiola added.

"In the morning I will speak with the doctors and we will decide. Hopefully he will play."