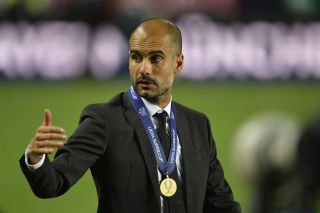 The old adversaries renewed simmering hostilities on Friday and there was little surprise when Chelsea manager Mourinho, who has now won just three of 16 clashes head-to-head with Guardiola, labelled his side's 2-2 (5-4) defeat on penalties somewhat of a travesty.

Mourinho, who also slammed Ramires' red card as against the spirit of football, claimed Chelsea had been 'the best team' and Bayern had 'just scored one more penalty'.

"It's his opinion," Guardiola said in response.

"It's normal, he can say that his team deserved better than what happened.

"We have played unbelievably good football. The best team won today. We had so many opportunities to score."

Chelsea went ahead through Fernando Torres but Champions League winners Bayern were level soon after half-time through Franck Ribery.

Eden Hazard again propelled Chelsea into the lead in extra-time but Javi Martinez's last-gasp equaliser took the game to penalties.

The first nine spot kicks were converted before Romelu Lukaku missed the decisive penalty for Chelsea.

Guardiola declined to wade into the debate over Ramires' dismissal, the second booking coming for a challenge on Mario Gotze.

"It's a question for the referee, not for me," the 42-year-old Spaniard said.

"I am a coach. I put players on the field and I try to play as best as possible for us.

"The referee is not a question for me. I never speak about referees."