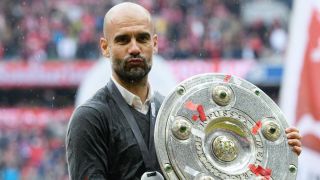 Ottmar Hitzfeld feels Pep Guardiola is under pressure to succeed in the DFB-Pokal final against Borussia Dortmund, but does not believe the Berlin showdown should impact upon his legacy as Bayern Munich boss.

Guardiola will end his three-season tenure in Saturday's showpiece at the Olympiastadion, aiming to add a second Pokal to three Bundesliga crowns.

Former Bayern boss Hitzfeld believes the famously rigorous Guardiola will not allow himself to switch off for the final match before he departs for Manchester City but believes the ex-Barcelona coach's legacy in German football is secure despite failing to secure a Champions League trophy.

"It's normal for a coach to have pressure until the last game of the season," Hitzfeld told Omnisport.

"Now he faces the cup final, where he can crown his time with the double. Then he'd have won the double twice in three years, that would be a great result, too.

"He'll not turn himself off before it’s over. Because of that, the pressure on him, is tremendous.

"But I wouldn't hinge his achievement on winning the cup final, because in general he enhanced Bundesliga with his style of playing."

Bayern finished 10 points clear of Thomas Tuchel's men at the Bundesliga summit this season and won the home league encounter 5-1 before sharing a cagey 0-0 draw at Signal Iduna Park.

Nevertheless, Hitzfeld is anticipating a classic in the Pokal final between starting XIs he expects to be evenly matched on the day.

"In Germany we can be glad that Bayern Munich and Borussia Dortmund are in the final because it’s a duel on eye level," he said.

"If you look at the starting eleven, I think Dortmund can hold Bayern’s pace. On the bench, for sure, Bayern has an advantage over Dortmund.

"Bayern is able to bring very high class players into the match, which Dortmund – in that form – cannot do. It’s going to be a very exciting game, where very much is at stake for both teams.

"Bayern is a little bit the favourite because you look at the table, where Bayern became champions with 10 points more than Dortmund.

"But BVB played a sensational season, too. They'd also deserve a title. Thomas Tuchel did a great job. As I said, I'm excited for a top match."