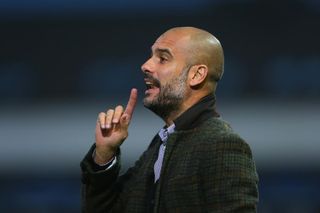 The Spaniard's reign became closely linked with the possession-based style of play that was initially fostered by Johan Cruyff at the Camp Nou before Guardiola used it to supreme effect.

Guardiola - now at Bayern Munich - revealed in a book written by journalist Marti Perarnau that he disliked the idea of keeping possession without any forward momentum.

The book details his first campaign with the Bundesliga giants, and in it, the 43-year-old is quoted as telling his players after a below-par win over Munich rivals Nuremberg: "I loathe all that passing for the sake of it, all that tiki-taka.

"It's so much rubbish and has no purpose. You have to pass the ball with a clear intention, with the aim of making it into the opposition's goal. It's not about passing for the sake of it."

In a meeting with his players the next day, he added: "You need to dig into your own DNA. I hate tiki-taka. Tiki-taka means passing the ball for the sake of it, with no clear intention. And it's pointless.

"Barca didn't do tiki-taka. It's completely made up. Don't believe a word of it. In all team sports, the secret is to overload one side of the pitch so that the opponent must tilt its own defence to cope. You overload on one side and draw them in so that they leave the other side weak.

"And when we've done all that, we attack and score from the other side. That's why you have to pass the ball, but only if you're doing it with a clear intention.

"It's only to overload the opponent, to draw them in and then to hit them with the sucker punch. That's what our game needs to be. Nothing to do with tiki-taka."