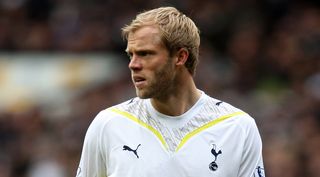 The 37-year-old Iceland international, who is hoping to represent his country at this summer’s European Championship, spent six years with the Blues from 2000-06, scoring more than 75 goals and winning two Premier League titles.

But after a spell at Barcelona, who he won the Champions League with, the forward was back in London after being loaned to Tottenham from Monaco.

Speaking exclusively in the March 2016 issue of FourFourTwo, Gudjohnsen says: “A lot of Chelsea fans won’t be happy that I’m saying this, but I enjoyed my time at Tottenham.

“We had a good team, with Gareth Bale and Luka Modric, and also guys like Peter Crouch, Ledley King, Niko Kranjcar, [Heurelho] Gomes in goal – a lot of really good footballers.”

And although he was hoping to seal a permanent move to Spurs as they prepared for Europe’s elite team competition, the transfer never materialised.

“The last words that I heard from Harry Redknapp were: ‘See you pre-season. You have been brilliant for us – we’re going to need you next season’. That never happened. I still had a contract with Monaco, so I went back there. Whether the two clubs couldn’t agree a transfer fee, I’ll never really know.”

Gudjohnsen might never have turned out for Tottenham at all, as West Ham – then-managed by his former Chelsea team-mate Gianfranco Zola – were also keen on recruiting him. The Icelander admits that he came very close to signing for the East London side, but preferred Spurs’ challenge for a Champions League place over the Hammers’ fight against relegation from the Premier League.

“I was very close. I spoke to Gianfranco Zola, but when I was travelling to England I had Harry Redknapp on the phone. He had spoken to my agent and my dad.

“When I landed in London, I had a decision to make: West Ham or Spurs? I opted for the team pushing for Champions League places rather than a team fighting at the other end of the table. That was the only reason for my decision.”

Read the full One-on-One interview with Eidur Gudjohnsen in the March 2016 issue of FourFourTwo magazine. Pep Guardiola goes under the microscope as we reveal what makes the world’s most innovative manager different from the rest, we go behind the scenes with Borussia Dortmund during their recent winter break and chat to Marco Reus, Henrikh Mkhitaryan and Pierre-Emerick Aubameyang. Plus there’s the English league that nobody wants to win, a look back at the maddest season ever and exclusive interviews with Samuel Eto’o and Hulk. Subscribe!