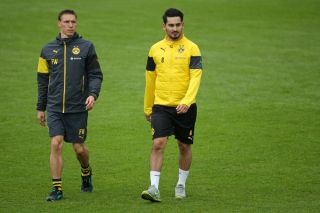 Germany attacking midfielder Gundogan was restricted to just three appearances for Dortmund last season due to a back problem that forced him to miss his country's successful World Cup campaign in Brazil.

But the 23-year-old has now resumed light training and is expected to make his comeback within a month.

And Gundogan is thrilled to be back preparing for the new Bundesliga season after the most difficult spell of his young career.

"I've not been as happy as I am now in a long time," Gundogan told Welt am Sonntag.

"It's fantastic to be able to train with the team again, even if I'm only restricted to running exercises."

Gundogan admitted that his prolonged lay-off left him unable to enjoy his personal life and not wanting to leave his home.

"I just didn't want to go out of the house," he added.

"My thoughts revolved around when I would be able to be fit again. I couldn't enjoy anything else in life."

Viewed as one of the most promising players in Germany, Gundogan would have been expected to be included in his country's World Cup squad if not for injury.

Instead, he was left to watch from home while his compatriots claimed a fourth world title, something which the former Nuremberg man could take little joy from.

"I missed this great tournament and that's not a nice feeling. I've lost a whole year."

After beating arch rivals Bayern Munich in the DFL Supercup, Dortmund open their Bundesliga campaign against Bayer Leverkusen next Saturday.